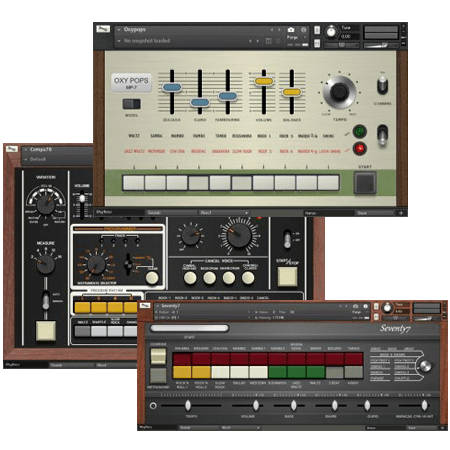 P2P | 17 November 2018 | 22.2 MB
Forgotten Keys aims to create the best possible simulations of old and rare electronic musical instruments and make them available to anyone with the full version of Native instruments’ KONTAKT sampler.

Compu78
is a virtual simulation of the CompuRhythm CR-78, a very influential drum machine released at the end of the 1970s.
It features all the original sounds meticulously sampled at multiple accent levels and with up to eight round-robin variations depending on the sound. All the original rhythms and variations have been accurately reproduced and you can program your own rhythms in the same manner as you would on the original combined with a WS-1 programmer. In addition, you can record a performance and save it as a MIDI file.

It included several Snapshots that reproduce the rhythms of famous songs that featured the CR-78.

Seventy7
is a virtual simulation of an old drum machine from the 1970s generally known as the Rhythm77 or TR-77. The TR-77 itself evolved from the Rhythm Ace and its original purpose was to provide rhythm to home or professional organists.
The sounds in Seventy7 are 24 Bit resolution samples with up to 8 round-robin variations depending on the sound. Great care was taken in recording and editing the sounds to get the best quality possible.

All the original rhythms have been accurately reproduced and can be combined together like the real thing. Seventy7 makes it easy to include these rhythms in your own music with its built-in performance recorder. Record a few bars of a rhythm then either save it as a MIDI file or drag it straight onto a track in your sequencer or DAW ready for playback.

Oxypops
is a virtual simulation of an old drum machine from the 1960s generally known as the Mini Pops 7. It was most famously used by a certain French electronic music composer in the 1970s.
The sounds in Oxypops are 24 Bit resolution samples and up to 16 round-robin variations are included. Noise generated sounds such as the Hi-Hat sound more natural and less “sampled” when variations of the sound are played at random.

All the original rhythms have been accurately reproduced and can be combined together like the real thing.

No doubt you'll want to use some of these rhythms within your song. Well, with Oxypops, you can record a performance and export it as a MIDI file or drag the data right onto a track in your sequencer or DAW ready to play back the sounds as recorded.

NOTE:
You will need the FULL version of Kontakt 5.8+ to load this instrument (NOT for Kontakt Player)