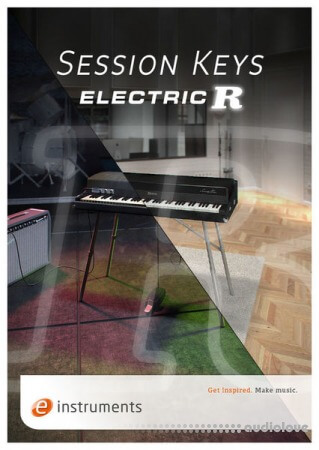 P2P | 05 September 2020 | 5.23 GB
Session Keys Electric R begins with the sound of a vintage 1976 Rhodes Mark I Stage Piano, specially modified with eight individual outputs to capture every nuance of its classic sound. Combined with a host of modern features, Electric R is guaranteed to inspire and satisfy even the most demanding music producers.

In addition to recording line out signals, an extensive microphone setup was used to capture the pure, unaltered acoustic sound of the instrument. The result brings the true Stage Piano feel to life and delivers an exquisitely detailed tone with supreme depth and flexibility.

An accompanying set of creative sound design and compositional tools makes Electric R the perfect choice for any production from jazz to funk, soul to pop...and beyond. Electric R – a vintage soul with a modern vibe.

Studio and Live – Two instruments in one

Studio was recorded directly through high-end pre-amps and A/D converters, reproducing the piano’s clear, bell-like character popular amongst some of the best jazz and pop artists in the world. Its versatile dynamic range can create anything from warm and mellow tones to extremely bright and barking sounds.

Live uses classic vintage outboard equipment and pre-amps for an edgier, rougher version of the instrument. The Rhodes’ distinct mid range is designed to sit well even in very dense arrangements, and its sound is reminiscent of those heard on revered funk and soul albums from the early 1970s.

Switch between the two anytime by clicking the Studio/Live buttons. Without any loading time to worry about, finding the right sound for your production couldn’t be faster or easier.

A Rhodes Soul, with more control

Session Keys Electric R delivers sonic possibilities that go way beyond the instrument’s original capabilities. The Pentamorph can give the classic Rhodes piano a new, complex voice in a matter of seconds using a single control: transform the original electric piano sound into atmospheric textures, create a reverse effect or even shift between acoustic and line-in signals.

For more refined adjustments, the powerful effect and scripting engine allows users to tweak virtually every element of the Rhodes sound. Details such as sustain resonance, key noises, release, and reverse samples are quickly and easily manipulated. Dynamic range and attack and release times are also within your control. Electric R even allows for adjusting the distance between tines and pick-ups. As any Rhodes devotee would know, these changes have a great effect on the instrument’s feel and sound. It also requires a laborious adjustment of a large number of individual screws – on Session Keys Electric R, all that’s required is the turn of a knob.

Electric R isn’t just a great electric piano, it’s also a great session player. The Animator boasts over 200 ready to play licks and phrases in different genres and styles that can help kick start (or finish!) any piece. Animator is much more than a simple phrase player, it follows keys and harmonies while providing complete control over a phrase’s dynamics and complexity using the pitch bend and mod wheels.

Smart Chord creates instant piano chords from a single note. Just set the key of your song and let Smart Chord create the harmonies for you. No keyboard? No problem. The Smart Chord function also allows Electric R to be played using pad controllers.

Electric R includes a large number of effect presets, from standards such as Auto Pan or Phaser to inspired atmospheric pads or punchy short hits.

The effect chain features classic electric piano effects such as Tremolo, Chorus, Amp Simulation, Delay, and Reverb. For more creative sound design, Electric R allows some of the instrument’s parameters to be assigned to the Pentamorph control. Or dig in deep and turn the Tremolo into a stutter-like modulation effect. The only limit is your imagination!