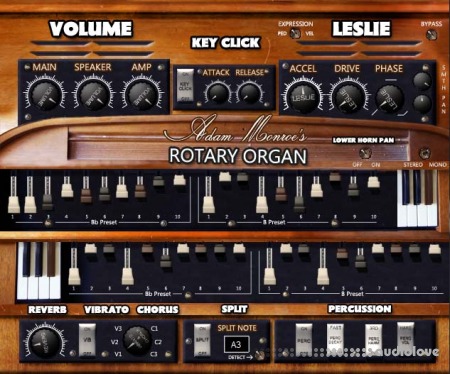 Team DECiBEL | 04 August 2021 | WiN: 616.74 MB | MAC: 1.49 GB
Adam Monroe's Rotary Organ was sampled from a Hammond M3 tonewheel Organ. The end goal was to simulate the sound of a Hammondnd B3 organ with rotating Leslie Speaker inside of a VST/AU/AAX plugin. Every drawbar on every note was sampled individually via the organ's built-in speaker through a Neumann TLM 102 microphone.

The signal was re-amped though a Fender Deluxe Reverb and recorded via a Sennheiser e906. Both signals were run through Grace M101 preamps. A Hammond M3 Organ combines the last two harmonics into a single drawbar, this note was omitted. Instead, a "digital foldback" teqchnique was used to extend the harmonics of the Hammond M3 to be similar to that of a Hammond B3.

The organ's range was augmented to be similar to that of a Hammond B3. This was accomplished by using the Organ's pedal tones to add the lower octave notes.

B3 effects where also digitally simulated and these include percussion, vibrato, and key click. Vibrato scanner is similar to that of a B3 and includes vibrato as well as vibrato+chorus. Key click was simulated by adding random noise to the attack and release samples. Some key click can be heard in the original samples but the effect has been exaggerated. Percussion was simulated in VST as it is in real life: a higher amplitude, percussive decaying sound is added to the instrument via the 2nd or 3rd harmonic. The plugin also includes reverb, braking, variable acceleration, drive/distortion, smoothing, adjustable stereo panning, key-splitting, and preset switching.

ENGINEERING:
The instrument was equalized to sound slightly more aggressive than a typical Hammond organ and therefore has the potential to stand out more in a mix. This can be adjusted with the "smoothing" knob, which will attenuate some of the harsher frequencies

Inside the VST the amp and speaker signals go through preamp/gain staging whether or not the Leslie bypass is engaged. The plugin requires a decent CPU - at least an Intel Core I3. This is because internally each harmonic is being summed for each note - which can include things like percussion and key click - meaning that each note requires upwards of 22 voices. Internally the VST is capped at 330 voices, which is equivalent to 15 notes of polyphony. The voicelist also requires extra processing power, as (unlike a piano or other percussive instrument) each not can be sustained indefinitely, and thus newer notes must work around this limitation.

The plugin also does a fair amount of internal eq and sonic shaping depending on the preset. A great deal of time was spent experimenting and finding useful drawbar settings and eq combinations. There are 32 built-in presets modeled after classic Hammond Organ drawbar settings. You can hear an audio demonstration of these presets in the mp3 section.

The memory footprint of the plugin is around 400 MB. All of the plugin's samples are loaded into memory upon loading as the plugin is primarily comprised up of looped samples, padded out with short attack and release samples. This means that this particular plugin is not dependent on a fast hard drive as it does not need to buffer samples during execution.

The plugin is designed to work with VST AU and AAX native versions and a Kontakt version was not created. This is because the plugin relies heavily on internal programming - for everything from the Leslie simulation to sample fold-back - that would be impossible to replicate with the Kontakt player's simple scripting language.

This VST is, essentially, a hybrid between a Hammond M3 and B3 with a more aggressive sound. It is meant to sound a bit unique to already existing plugins and simulations, but with the wide range of parameter combinations, many sounds are possible.