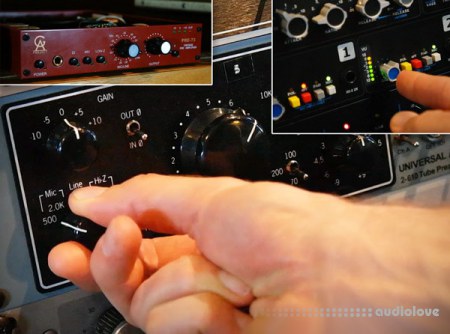 SYNTHiC4TE | 27 August 2017 | 676 MB
New to recording with Microphone Preamps? Not sure of the differences between a $100 preamp and a $1000 preamp? Well pull up a seat and hang out with Scottie Dugan and Brian Zieske, as they show you everything you need to know to get started with using microphone preamps!

This series is designed for those who never used a microphone preamp before, and want to know about all the common features and controls found on mic pres, as well as how to set them up. It also touches on how the components and circuit design varies between units, and gives some sonic examples between an inexpensive “all-in-one” mic pre / audio interface and more expensive stand alone mic pres. It's not a mic-pre "shoot out" however, and we chose the MOTU because there are so many out in the field, and the others because they are studio staples.

Scottie starts off the series welcoming you, and then gives a crash course on Mic Preamps, covering what they are and do, they’re different features and functions, and how to hook them up.

Scottie then turns the show over to his friend and colleague Brian Zieske, who invites you into his pro studio for some critical listening videos featuring different types of Mic Pres on different sources. Instruments include Electric & Acoustic Guitars, Fender Rhodes, a Juno 60 Synth, Bass Guitar, Vocals, and Drums, so you can really hear the differences between various mic preamps. (High quality monitoring or headphones recommended.)

Wrapping it up, you’ll learn about one of the most important, but often overlooked aspects of using a microphone preamp, Gain Structure. With this set correctly, you’ll get much better sounding recordings and have correct levels into your recording interface, and that’s a good thing.

See the individual tutorial descriptions below for more info. If you’re just getting started recording and have no clue what a microphone preamp is, just want to brush up on using them, or hear the differences they make on different sources, check out “Microphone Preamps Explained®” today!

Only registered users can see Download Links. Please register or login.
RATING
+2
crossbeat
Learning
How To Use