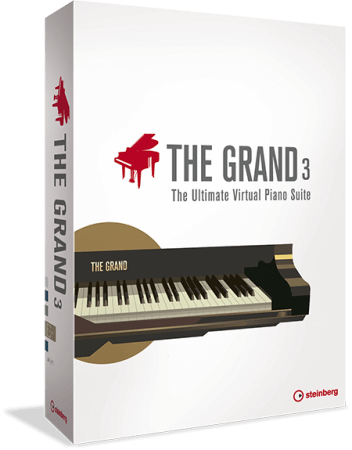 P2P | 28 August 2021 | 29.2 GB
The Grand 3 boasts completely different piano models to its two predecessors, merely building on the prestige that its name has managed to attain over the past years. This means that versions 2 and 3, both old and new, equally deserve to be held in high esteem for their respective quality piano models. But always keep in mind: for The Grand 3, Steinberg has not only come up with several different piano models but uses intelligent sample architecture and latest recording technology to achieve an even more authentic sonic image and realistic feel.

Three grand masters
The Grand 3 prides itself on three outstanding virtual grand pianos with a rich and realistic sound based on the most widely acclaimed grand pianos. The Yamaha C7 grand piano is the artist’s choice - its sound providing a true concert grand experience, while the expressive tone of the Bösendorfer 290 Imperial provides an extended musical range not found in other pianos. What’s more: the incredible sound, responsiveness and superb playing behavior of the Steinway D have also been added to perfectly complement the collection of virtual pianos featured in The Grand 3.

More Pianos, more choices
The classic Yamaha CP80 Electric Grand has a timbral character that makes it genuinely recognizable. The Nordiska Pianofabriken upright piano has been recorded and designed for the not so grandeur of musical genres - its sound is ideal for pop and jazz music.

Superb reverberation
The Grand 3 comes with a convolution reverb based on the same technology used by REVerence, the world’s first VST3-based convolution reverb processor already featured in Cubase which benefits from every single aspect the VST3 standard has to offer. It boasts sumptuously realistic natural space simulation, emulating any acoustic environment - from the smallest live music venue to the most impressive cathedrals. This reverb includes a vast number of impulse responses that put the characteristic sound of some of the world’s most distinctive settings immediately in one’s hands - both in stereo and surround.

An algorithmic reverb is also included to increase the amount of reverbs. With more than 60 reverb presets, this leaves the artist with ample scope to spatially enhance the piano sound!

Flexible equalization
This powerful and versatile equalizer offers full four-band parametric control that works as a sum over all output channels with variable response curves and shelving modes, as well as analog-style peak filters.

All tuned up
The enhanced tuning editor provides customizable scales and a wealth of presets for tempered and concert tuning. Each tuning situation may be stored and retrieved as preset whenever required.

The Grand 3 standalone
The standalone version allows The Grand 3 to be used without a host application - a great choice for performing live and delivering the best sounding, most playable virtual piano software ever experienced!

The Grand 3 Advantage
The Grand 3 covers everything an artist is looking for in a virtual piano suite. Of course, it features five premium piano models with an overwhelming sound quality, but it also focuses on the intricacies: flexibility through different microphone positions, compatibility through multiple format support, and usability due to the range of included tools.

Yamaha C7
The unparalleled tone of a Yamaha C7 grand was recorded in its whole beauty and musical range. Its incredible sound, resulting from the tonal projection and long sustain, and response with super realistic playing behavior delivers the musical equivalent of perfection. This virtual piano is truly in a class of its own and conveys the expressiveness of the player.

Bösendorfer 290 Imperial
The wider register of the Bösendorfer 290 Imperial grand adds to the piano’s timbre which has intricately been sampled to give the artist the required control when playing the softest pianissimo through crescendos to the reserves of power needed for the loudest fortissimo. This virtual piano model shines in every musical aspect, providing the exuberant sound quality and assertiveness of its corresponding real piano pendant.

Steinway D
The enchanting depth of tone and ultra-responsive touch of the Steinway D grand piano is reflected in the Model D found in The Grand 3. Its warm and vibrantly rich sound and its overall performance simply make playing this virtual piano as enjoyable as possible.

Yamaha CP80
The Yamaha CP80 Electric Grand is one of the most favorable classic electric grand pianos around and comes with built-in effects, such as tremolo, phaser, flanger and chorus. Here Steinberg has acquired the samples directly from the source: the content experts at Yamaha.

Nordiska Upright Piano
The upright by Nordiska Pianofabriken definitely has personality of the right sort! And its characteristic tone has been captured in the virtual upright piano model, designed to get the job done when looking for that little extra edge to any song. It might be rock, blues, jazz, gospel or any other style that simply needs some attitude - when the tone requires a less “grand” sound this model is definitely the artist’s first choice.