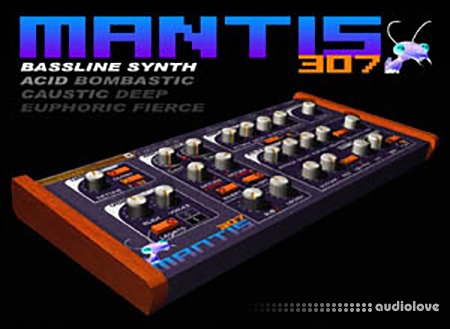 Features killer unison and distortion, as well as an agressive constant time slide (predictable portamento). In addition, 2 oscillators + subosc per voice, sync, mono and polyphonic modes, keyboard tracking, and 3 envelope curve types. (and much much more!). And with a super low CPU footprint that lets you layer many mantis sounds without breaking a sweat.

Mantis307 was created for raw acidic sound desigMantis really shines when used like a tb303, as a bassline acid monosynth. To get you started, there are several teebee presets to get the aciiid juices flowing. But don't be fooled, Mantis's range of sounds include much much more than just 303 and basses, hit the audio samples below to see.

Guitars too? Version 1.9.0.0 of Mantis307 adds a powerful little feature to control the sustain part of the filter envelope (using note velocity) for an expressive guitar palm muting effect! Combined with an external amp simulator like Waves GTR, NI GuitarRig, or iZotope Trash, the Mantis307 VST with it's rich unison chorus and 3 tweakable oscillators can easily achieve an aggressive metal guitar 'wall of sound' like you hear in NIN or KMFDM albums - all by itself with minimal configuration. Just check out the 'mutable' patch in the VST, and tweak the note velocity to hear muting change, tweak decay to make the muting more 'snappy'.