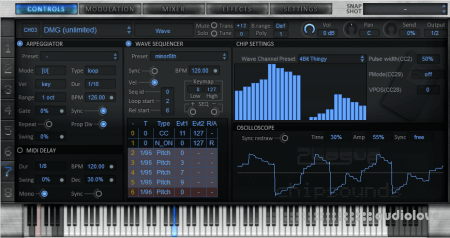 Team R2R | 11 October 2022 | 81.82 MB
chipsounds authentically emulates several vintage 8-bit-era sound chips (plus variants), down to their smallest idiosyncrasies. It also faithfully allows you to dynamically reproduce the accidentally discovered sounds effect tricks and abusive musical techniques that were made famous by innovative chiptune composers and classic video game sound designers, which for the good part of the last 2 decades, have pushed beyond the boundaries of the original chip designs.

chipsounds is powered in part by Plogue's powerful ARIA 64-bit sampler/synthesis engine that also powers Garritan's complete new product line (and is also featured in many third party applications). chipsounds reproduces the exact form spectra of the most sought-after classic sound chips, including their most well-known variations, as sonically accurate as possible without adding any non-authentic aliasing or DSP artifacts.

Research and analysis for this project has been made in house on Plogue's large collection of cartridges, modified consoles and classic computers owned by the team and also on the chips themselves using custom made circuit boards and low level 8 bit software code.

Basic and RAW, the purest chip there is.
Different NOISE patterns for all variants, all emulated.

The most important sound chip of the '80s gaming era.
Variable Pulsewidth, SAW, Triangle, 8bit noise and even combined waveforms.
Most waveforms are actually SAMPLES of the real thing for 100% accuracy, especially for the combined waveforms.