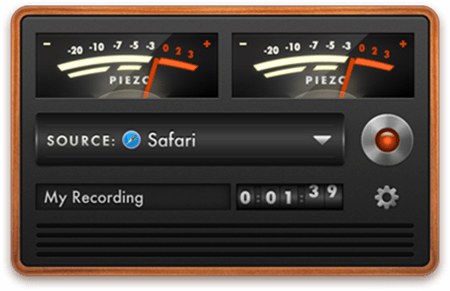 HCiSO | 28 June 2021 | 17 MB
Piezo makes it a snap to record audio on your Mac. In seconds, you'll be recording audio from any application or from audio inputs like microphones.

Piezo requires almost no configuration, and it's a blast to use. Simple and inexpensive - that's a winning combination.

Fixes and Improvements in ACE 11.7.1
The Audio Capture Engine (ACE) has been updated to 11.7.1, with fixes for several rare issues.

Enhancements to Piezo's Built-In Updating
Piezo's updating code has been overhauled and improved. It is now based on Sparkle 1.26.0, with several customizations.

To avoid possible issues, Piezo will no longer offer to “Install on Quit”. Automatic background updating has been removed as well, placing the user in charge of all updates.

As always, we strongly recommend leaving the “Automatically check for updates” option enabled.

Piezo's manual is now provided online, rather than being built in to the application. The application's “Help” menu has also been modified and streamlined, to get you assistance as quickly as possible.

Piezo has been updated to prevent rare issues with its main window failing to appear on screen.

Many debugging improvements have been made:


It's now possible to access several relevant menu items while the initial Quick Tour is open.

The “Purchase” button in the License window now uses a better link to get to the Buy page.

The Update window's width has been tweaked, to handle longer titles.

Get Access to Test Builds
Piezo now features a new “Check for test releases” hidden preference. When active, you may receive notice of pre-release versions of the software, ahead of its wide release. If you're interested to test updates, you can turn this option on in the Debugging window (accessible by holding option while viewing the “Help” menu, then selecting “Quit and Relaunch for Debugging”).