Samplecraze Normalisation What It Is and How to Use it [TUTORiAL] 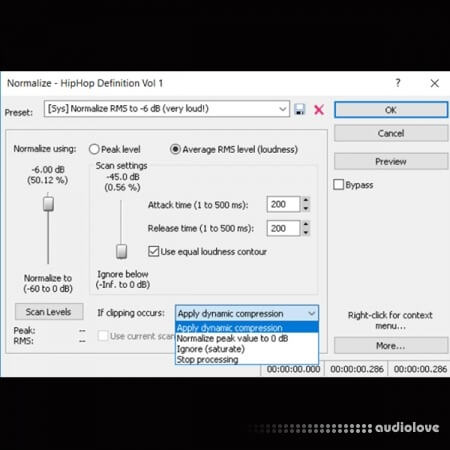 Normalisation is a digital signal processing function that’s available in a lot of digital audio editing software. It scans through the program material for the highest peak level, and if that level doesn’t reach the maximum available dynamic range, the software boosts the overall signal so that the peak hits the highest level possible. This is referred to as Peak Normalisation. If the audio displays the highest peak value as -3 dB then we need to use peak normalisation to raise that level to 0. This in turns raises all peak transients by the same value.

RMS (Root Mean Square) Normalisation works differently. Instead of using the highest peak value as the reference it now takes all peak values and divides them by the number of peaks. Once this average has been established the process will use the value from this to normalise to 0.

There are a couple of things to be wary of: because the process normalises the whole audio signal it will also raise the noise floor in the process.

If you need to normalise then think carefully about whether to use use Peak or RMS (average level) as each will output a different response.

I tend to find that RMS (Root Mean Square) works best on long audio files that have varying peaks and troughs. Peak tends to work well on single-shot samples, much like drum hits. BUT try both and judge for yourself.

Normalisation still has a part to play in this industry and in particular sound design whereby samples are often truncated and peak normalised to 0. This allows the samples to have a constant value when processing.

What is Normalisation? Should we use it and if so how do we use it correctly? Let me explain in detail how and when you should use this process and whether you should choose Peak or RMS.

The plugin used in this video:

Topics covered in this video are:

Only registered users can see Download Links. Please register or login.
RATING
+2
Legend
Learning
How To Use