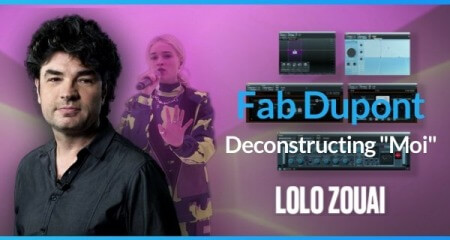 SYNTHiC4TE | 14 May 2021 | 1.05 GB
In 2017, Lolo Zouaï came bursting onto the pop music scene with single "High Highs to Low Lows," which has since gained millions of streams, Times Square billboard placements, and been received with critical acclaim by the world's most respected music publications.

After a brief meeting, Lolo, producer Stelios, and their team tagged award-winning producer and mixing engineer Fab Dupont to help shape the record into the smash hit it has become on the world stage.

In this pureMix exclusive tutorial, Fab breaks down how the record came to be, his input in the production stage, and how he approached mixing the album before deconstructing his entire mix, track by track, of the hit single "Moi."

Explains how he met Lolo Zouaï, her team and how the project came to be
Plays the original demo he heard in the first meeting with the team
Explains the song structure suggestions he made in the production phase
Discusses how he had to organize the workflow with Lolo's team to work extremely quickly throughout the mixing of the full length record
Breaks down his gain staging for the mix
Describes his vision for the vocal sound of the track
Explains every detail of Lolo's vocal chain, and why he made the tweaks he did.
Gives the story of creating the 808 tone that carries the low end of the track
Dissects his parallel processing with the drums and bass of the track to teach how he crafted a fat and punchy foundation for the track
Goes through the synths, strings, and additional production for the rest of the track, showing how he molded each track to support the vocal performance