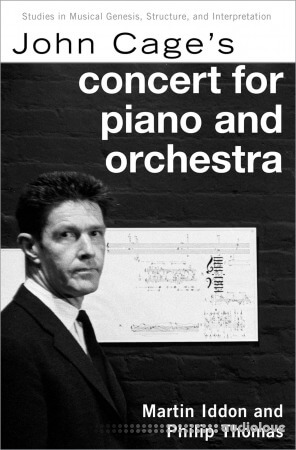 English | 480 pages | Oxford University Press (June 2, 2020) | 0190938471 | PDF | 12 MB
John Cage's Concert for Piano and Orchestra is one of the seminal works of the second half of the twentieth century, and the centerpiece of the middle period of Cage's output. It is a culmination of Cage's work up to that point, incorporating notation techniques he had spent the past decade

developing - techniques which remain radical to this day. But despite Cage's vitality to the musical development of the twentieth century, and the Concert's centrality to his career, the work is still rarely performed and even more rarely examined in detail.

In this volume, Martin Iddon and Philip Thomas provide a rich and critical examination of this enormously significant piece, tracing its many contexts and influences - particularly Schoenberg, jazz, and Cage's own compositional practice - through a wide and previously untapped range of archival sources. Iddon and Thomas explain the Concert through a reading of its many histories, especially in performance - from the legendary performer disobedience and audience disorder of its 1958 New York premiere to a no less disastrous European premiere later the same year. They also highlight the importance of the piano soloist who premiered the piece, David Tudor, and its use alongside choreographer Merce Cunningham's Antic Meet. A careful examination of an apparently bewildering piece, the book explores the critical response to the Concert's performances, re-interrogates the mythology surrounding it, and finally turns to the music itself, in all its component parts, to see what it truly asks of performers and listeners.