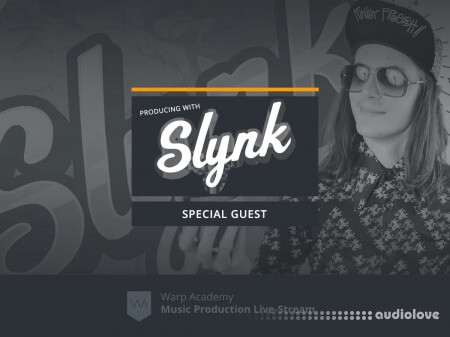 Team DECiBEL | 08 August 2021 | 1.59 GB
Learn the secrets of Slynk, renowned glitch hop producer and funk legend. See inside one of his songs as he shows you every piece of his production.

A Bit of Slynk's Background:
Naturally gifted with a musical ear, Evan aka Slynk flirted at first with a range of classical instruments including piano, guitar, and drums, but it's when He started experimenting with sampling and sound design that the wheels were ultimately set in motions.

From his first gigs in an underground New York-inspired cafe in his hometown of Brisbane to his first International appearance at Shambala's Fractal Forest, in 2009, 5 years had gone by 5 years spent refining his skills and experimenting and educating himself and his fans with mash-up productions of classic hip hop, ingrained with rare and funky, rhythmically savvy grooves.

With the overwhelming support and love from the world's most respected funky breaks producers behind him, Slynk's reputationSlynk has been growing strong with now numerous releases on several labels under his belt (Jalapeno Records, Goodgroove, and Discocakes just to name a few).

His timeless nufunk electro boogie bravado has met the public with an overwhelming enthusiasm, climbing the charts in more than one occasion as in the case of the robust bass treatment and hippunishing live drum swing He reserved for his rework of Ed Solo & Deekline's "No No No!" that comfortably sat at number one in Juno's best Selling Single Chart.

His fourth appearance at Fractal Forest in 2013 brought his unstoppable Forward Momentum to a new level with a set that not only constitutes his best credentials today but also consecrated his name to the West Coast Funk Nation.

Nothing more than another step in spreading his instantsmileprovokingsupreme'80sfunkflavored boogie, Slynk moved to British Columbia at the beginning of the summer of 2013 to complete his conquering of the New World and, as an Ambassador of Funk, he is now getting ready to share his love for music with the rest of the world.