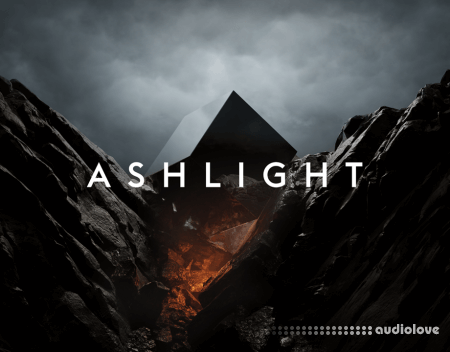 Team DECiBEL | 28 August 2021 | 2.57 GB
THE DARKER SIDE OF GRANULAR
ASHLIGHT concludes the granular trilogy with monochrome soundscapes, pulsing textures, intricate leads, and cold atmospheres. It combines a specially-recorded sample library with grain and sample playback modules in a powerful engine with intuitive modulation controls for scoring shifting intensities, from edge-of-your-seat sweeps, to introspective keys, and world-shaking walls of sound.

ASHLIGHT'S SOUND
Bowed and rubbed metals, carbon, ceramics, glass, and more - ASHLIGHT is the product of obsessive research into unconventional sound sources that can be explored, transformed, and exploded to epic proportions by the engine. Layered grain sources including waterphones, cymbals, feedback cycles, and synths count among over 360 sample sets in ASHLIGHT's library. An extensive sound design process went into exploring the idiosyncrasies of each sound source to create 300 presets.

THE ENGINE
GRAIN MODULE
The streamlined granular engine scans across ASHLIGHT's specialized source material to create otherworldly organic tones. The smallest nuances of a bowed carbon object can be expanded into epic pads, metal layers can develop into a unique bass timbre, or foley can be scanned for ghostly accompaniments to key patches - all while preserving their original sonic quality. Tempo-synced playback means risers and transitions can be played on-cue.

SAMPLE MODULE
Grain textures layer up with one-shots in the sample module. Choirs, synths, noise, percussion, pulses, and much more can be blended in to provide patches with attack or ambience; from the anxious to the epic, the chilling to the chilled-out. ASHLIGHT's arpeggiator can be used to power shifting, rhythmic patterns. The sample module is also the place to layer multisampled pianos, strings, vibraphone, ceramics and more for building more melodic patches.

PERFORM AND MODULATE
Performative modulation is a fast way to create waves of intensity in ASHLIGHT. MIDI Polyphonic Expression (MPE) support allows for polyphonic modulation of the grain engine parameters.The X-Y pad provides intuitive real-time control over multiple modulations at once. Create subterranean pulses and stratospheric shimmers with gates and delays, bring sounds to their limit with overdrives, sweep in washes of reverb, and add the finishing touches with EQs and compression.

MAKING ASHLIGHT
ASHLIGHT is the third release in a trilogy of granular instruments from Frank Elting. Following on from the bright, sci-fi-eque STRAYLIGHT and vocal-based PHARLIGHT, it sees Elting work with Amsterdam sound designers The Solos towards darker and colder textures through bowing and rubbing everything from carbon to cardboard in search for submersive textures and moodier timbres. The Solos are known for lending their signature sound to the trailers for blockbuster film scores such as Godzilla, Black Panther, and Justice League, as well as series like Game Of Thrones and The Walking Dead.