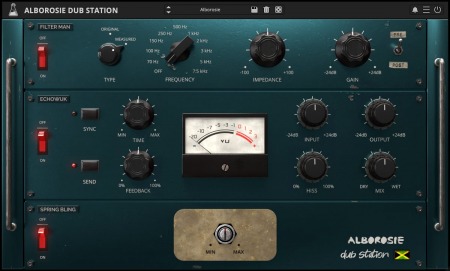 Team R2R | 29 October 2021 | 38.7 MB
Inspired by King Tubby
Straight from the heart of Jamaica's most prolific music community, Waterhouse in Kingston, we proudly introduce you the Alborosie Dub Station.

We sampled, analyzed, and carefully recreated the original filter, echos, and spring reverb pre-owned, modified, and used by the legendary Osbourne Ruddock “King Tubby” – producer, studio engineer, and pioneer of dub reggae from the golden era of the 70s – from Alborosie's personal vintage gear collection.

ECHOWUK: directly from federal studios, then King Tubby studio in Waterhouse Kingston, the MCI 2 track tape that was used to record and also to create the echo effect for most of the reggae classics overall and popular Tubby's instrumental dub mixes.

SPRING BLING: directly from King Tubby studio in Waterhouse Kingston, the modified Fairchild Spring Reverb used by the Maestro himself in most classic records and dub mixes he recorded and produced.

FILTER MAN: modeled after Tubby's so-called “Big Knob”, a passive high-pass filter with eleven frequency steps from 70Hz to 7.5KHz. This filter defined the sound of the entire 'roots' area of Jamaican music!

Special thanks to Lloyd James “King Jammy” for the continuous inspiration and guidance.

"We "scramble" our copy protection
source code directly every time a
release build is performed. It
takes a while to get something like
that, build times are longer, and
debugging can be a bit more tricky, but
for us, it was worth it. The latest
working cracks for our products are
nearly 2 years old. Six new products
have not been cracked (yet), which
never happened before."

Developer added many new protections
and files are getting fat. But none
of them are effective for our 2019
crack method. One witch says, it
took her 2 hours to complete first
crack (to check the change from 2019).
Then we spent 5-15 minutes per product.
Developer is misunderstanding something.

Another fact is that we haven't even checked
thier products for a while because we spent
more time for dongles. Say thanks to PACE
and WIBU for protecting AudioThing :)