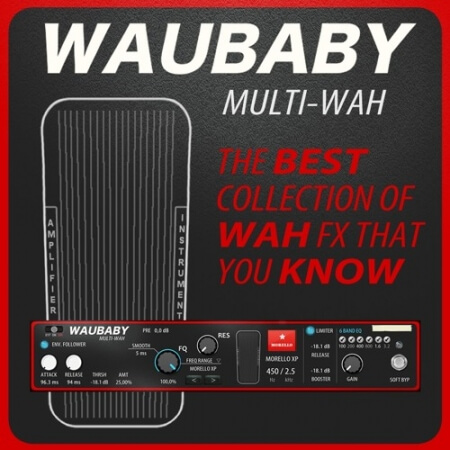 Team DECiBEL | 29 March 2022 | 21.3 MB
WAUBABY is not just another Wah-Wah effect. It is the biggest existing collection of known Wah pedals emulations all in one box. Now it couldn't be easier to select that special Wah tone you need from 29 Wah models and 60 modes. This is a collection of most the popular, most recognized and iconic Wah pedals also including artist signature pedals with further expanded range modes for creating your own ultimate wah tone in the Reason Rack. Now you can have a big bag of Wah pedals all contained within one Rack Extension. This is WAUBABY baby!!!!

Select the frequency range pedal model and sweep it using the pedal with either frequency knob or even a foot controller. From narrow and high to subtle and broad tones everything is possible using the various Wah pedal models and modes of WAHBABY.

The Wah pedal shifts a bandpass filter with a resonant peak creating the sounds of a trumpet mute, or a human voice like a "Wah-Wah" also known today as "Wacka-Wacka" on rhythm guitar.

The Wah effects usually work on the guitar mid range sound. Some pedals have been specially created for use with Bass guitars. Many keyboardists also use Wah effects with keys and synthesizers to produce humanized sounds. WAUBABY includes Wah models and modes for guitars, bass and also include allows for frequency range mode tweaking for more effective use with various other kinds of incoming signals.

The Wah Pedal is a frequency range filter effect, it is very popular in the world of music since its innovation in the 1960's as an experimental solution to mid range boosting of a guitar signal.

WAUBABY is a unique and must-have effect collection for all fans of Wah.

Try it now in the Reason Rack.