Thinking In and About Music: Analytical Reflections on Milton Babbitt's Music and Thought 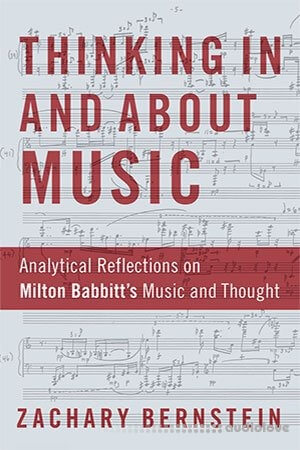 Zachary Bernstein | 2021 | ISBN: 0190949236 | English | 324 pages | PDF | 14 MB
Milton Babbitt (1916-2011) was, at once, one of the century's foremost composers and a founder of American music theory. These two aspects of his creative life--"thinking in" and "thinking about" music, as he would put it--nourished each other. Theory and analysis inspired fresh compositional ideas, and compositional concerns focused theoretical and analytical inquiry. Accordingly, this book undertakes an excavation of the sources of his theorizing as a guide to analysis of his music.

In Thinking In and About Music, author Zachary Bernstein shows how Babbitt's idiosyncratic synthesis of ideas from Heinrich Schenker, analytic philosophy, and cognitive science--at least as much as more obviously relevant predecessors such as Arnold Schoenberg--provide insight into his aesthetics and compositional technique. At the same time, a close look at his music reveals a host of concerns unaccounted for in his theories, some of which seem to directly contradict theoretical expectations. Bernstein argues, therefore, that new analytical models are needed to complement those suggested by Babbitt's theories. Departing from the serial logic of most previous work on the subject--and in an attempt to discuss Babbitt's music as it is actually heard rather than just deciphered--the book brings to bear theories of gesture and embodiment, rhetoric, text setting, and temporality. The result is a richly multi-faceted look at one of the twentieth century's most fascinating musical minds.