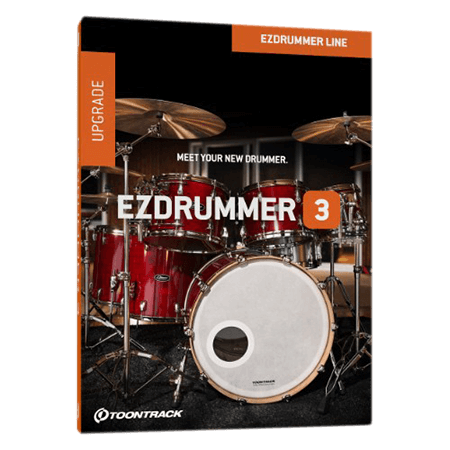 WN: Team V.R | 10 November 2022 | 705 MB
MAC: Team V.R | 13 November 2022 | 838 MB
EZdrummer 3 reinvents the role a piece of drum production software can play in a songwriting context. It gives you the creative reins to a comprehensive set of easy-to-use features that allow you to create full-fledged drum tracks without ever leaving the software.

Ready to write some songs? Meet your new drummer.

IT ALL STARTS WITH AN IDEA.
A solid groove is the heartbeat of any great song. EZdrummer 3 has a wide range of features designed to help you effortlessly get just the right groove going – for your track.

GOT A RIFF?
Just drag and drop your audio or MIDI and the Bandmate will come up with a suggestion on the fly.

TAP IT IN.
Hear that perfect rhythm in your head? Use the Tap2Find feature and let EZdrummer 3 list its best matches.

WRITE IT IN.
Pen your idea in from scratch in the onboard Grid Editor. Then, add more soul and personality to it using the many features for style, feel and timing.

THE POWER OF PERCUSSION.
EZdrummer 3 includes the optimal staple set of percussion. Add it to your groove at the click of a button.

THE MIDI LIBRARY.
Grooves and fills covering the entire range – from subtle to extreme.

General
A print function has been added to the MIDI Mapping Layout window.