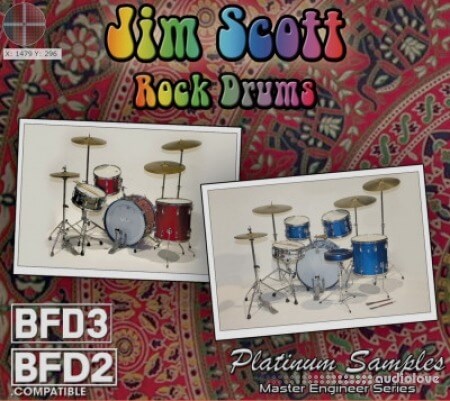 P2P | 30 June 2022 | 34.68 GB
One of L.A.'s most respected producers, engineers and mixers - and one of the busiest - Jim Scott has built his rep off of crisp, live-off-the-floor sounds and attendant good vibes. Scott picked up his first Grammy in 1995 for engineering Tom Petty's Wildflowers, scoring two more for his work with Santana on Supernatural and the Foo Fighters' One By One. In 2007, he doubled his Grammy total, scoring a hat trick for his recording of the Dixie Chicks milestone Taking the Long Way. That album was the most recent of dozens of projects Scott has done with Rick Rubin during the past two decades, from Petty and Johnny Cash to the Red Hot Chili Peppers and Slayer. (Bud Scoppa, Mix Magazine July 2007)

Rock Drums Volume 1
Volume 1 includes almost 80 gigabytes of uncompressed drum samples recorded with as many as 256 velocity levels featuring 40 drums and cymbals including kits played by Chad Smith (RHCP) and Steve Ferrone (Tom Petty & The Heartbreakers, Eric Clapton). One of the kits is recorded with both sticks and brushes and another with both sticks and blast sticks for a total of 59 drum and cymbal choices.