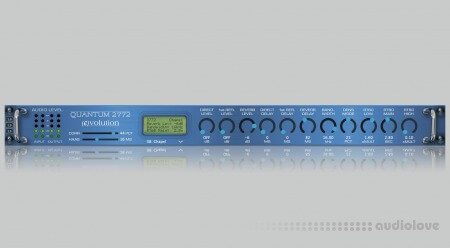 1) Accurately modeled resonances of a space. Reverb simulators commonly use “ray tracing” within the time domain to attempt to provide the aural cues necessary for size, depth, and other factors. The Quantum 2772 Evolution takes a different approach by modeling the resonant modes and modal densities of a real room. By modeling the modal density patterns and distribution of resonances throughout a room, the listener is provided with psychoacoustical cues that help to create a true sense of space and depth.

2) Unique, non-linear dynamic envelope. Most reverbs respond in a linearly static way to sound impulse stimuli, resulting in a rather predictable and two-dimensional sound. Because of its system of related, interconnected resonators, the Quantum 2772 Evolution is able to create a much more realistic envelope of sound in the attack phase by creating a non-linear system which models the complex resistance and inertia characteristics of a real room. As a result, a certain clarity of sound is achieved as shorter, softer sounds are left unclouded, while longer sounds gradually build into realistic, complex tails.

3) Clear, un-modulated reverb. Most reverb simulators rely on modulation to avoid a buildup of harsh resonances within the soundfield which often results in unnatural time and pitch fluctuations. Because the Quantum 2772 Evolution embraces the natural interaction and build-up of well-coordinated resonances, it does not need to rely on any form of modulation, offering a degree of clarity, naturalness and pitch-stability not typically found in other reverbs.