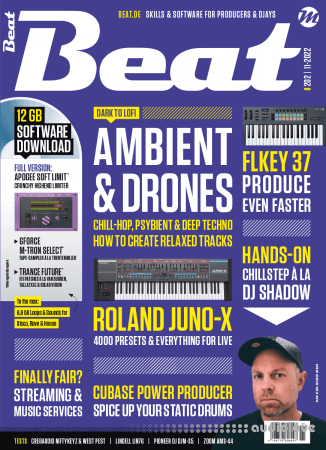 English | 84 pages | True PDF | 54 MB
BEAT 11/22: Ambient & Drones - How to create chilled tracks
As one of the most timeless music genres, Ambient has always kept a firm place in the flood of electronic styles. Thanks to inspiration from other styles of music, several successful subgenres have emerged, such as Drones and Psybient. We‘ll go through the most important varieties of Ambient and show you how to produce tracks in the style of Suduaya, Deepbass, Align as well as DJ Shadow. Finally, genre pioneers like Ian Boddy and Banco de Gaia as well as current innovators like Solar Fields and Carbon Based Lifeforms give exciting insights into their creative process.

Streaming & Musician’s rights - finally fair?
Streaming is no longer the future. Streaming is the now. But the problems created by a shift to streaming are by no means a thing of the past. Rather, Apple Music, Spotify, Deezr and Tidal have given labels more power over their music than ever before. Maybe it had to be like this. But can it go on like this?

Producer Workshop: The SP-404 in your MPC
Akai‘s MPC Series and the Roland SP-404 share an intimate friendship that complements each other perfectly. While both are samplers at heart, the 404 is much more popular for its live effects, mainly because of the rich lo-fi character and its immediate access to the parameters. It would be cool to have that natively in the MPC right away, wouldn‘t it?

Create Chillstep à la DJ Shadow
Like only a few artists, DJ Shadow manages to move musically permanently on the height of time, to reinvent himself continuously, without turning his back on his loyal fans. On his album „The Mountain Will Fall“ there are also two candidates between experimental tracks that are perfect examples for the currently popular Chillstep sound. Let‘s get inspired...

Free with BEAT 11/22: Apogee Soft Limit
Our software highlight replicates the soft limit circuitry familiar from Apogee‘s A/D converters and audio interfaces; in addition to transparent dynamic limiting, it also allows high-end sound coloring. With only three controls, the effect plug-in allows limiting from subtle to drastic. It also allows hearty distortion with an analog sound character. We‘ll show you how to use it musically!