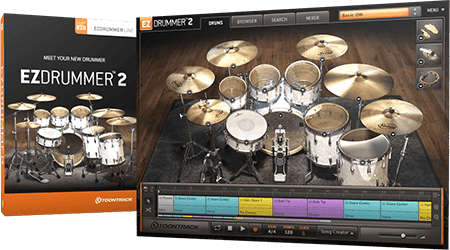 WIN: Team V.R | 10 April 2021 | 235 MB
MAC: Team V.R | 26 February 2020 | 253 MB
EZdrummer 2 takes drum production to a whole new level. It was designed to erase any technical barrier between you and your creativity and introduces several groundbreaking features for quick and easy songwriting. In EZdrummer 2, you can go from initial rhythmic idea to finished, mixed and customized drum track without ever leaving the program. This is without a doubt the best sounding, most intuitive and creatively gratifying software environment for drum production on the market – a perfect marriage of sound, form and function.

Welcome to a new era of drum production for songwriters. Meet your new drummer!


FIND & GET YOUR GROOVE DOWN
EZdrummer 2 introduces several features when working with MIDI drum grooves. Tap or record your rhythm to find a matching groove, search by filters or browse the traditional way in the conveniently laid out MIDI browser.

TURN IT INTO A SONG
Go from initial rhythmic idea to full track! Drag and drop drum parts to build your own track directly in the program – or let EZdrummer 2 do it for you! If you drop a groove in the Song Creator, it will list all files with a similar feel and style. It will also let you lay out a complete track using included or user created song templates.

TALK TO YOUR DRUMMER
For the first time ever in a drum software setting, you can now “communicate” with your drummer. Use the Power Hand to instantaneously change the leading instrument or the Amount or Velocity knobs to control the complexity and velocity in your selected groove – while it’s playing!

EMBELLISH YOUR SOUND
Done with your track? EZdrummer 2 has a wide selection of ready- made, user controllable effect chain presets to ensure that the final mix sounds exactly right for your song.

SONGWRITING – EZDRUMMER 2
Got and idea for your next song? Mike shows you EZdrummer in a songwriting situation.

PRESS EVENT AT BRITISH GROVE
In February 2014, we invited the music industry press for a private demonstration of EZdrummer 2 and all its new features. On location, where the sound libraries were recorded, at the British Grove Studios in London, England.

General
- The audio rendering would freeze if several CC 120 (“all sound off”) MIDI events were received at once, which could happen for example when playback was stopped in Logic Pro X.
- PreSonus ATOM pad controller should no longer switch to keyboard mode when connected to EZdrummer 2 in Studio One.

Drums Tab
- User kit presets were not saved correctly if they contained instruments from other sound libraries.
- The silencing of the preview sound when the drum property window was closed would sometimes result in a click/pop.
- In drum properties, if the EZX that was already selected got reselected, “None” became selected in the drum list and it said “None” on the preview pad.

Browser Tab
- The name of a MIDI file that is created by dragging from the Browser (for example to desktop or to User MIDI) no longer becomes a long string that describes where in the browser it came from, it now becomes the name that is shown in the browser (similar to how it was in version 2.1.8).

Search Tab
- The name of a MIDI file that is created by dragging from Search now becames the name that is shown in Search instead of the name that the file has in the Browser.

New:
– Aftertouch is now preserved when you record or import MIDI.
– Hi-hat CC is no longer converted to notes when recording.
– Aftertouch and CC can now be removed from song blocks using the right-click Remove Notes menu.

Fixed:
– Certain effect knobs in several EZXs did not work as intended (in version 2.1.7 only).
– When starting the standalone on MacOS X Snow Leopard, if the previously used audio device could not be opened, the error dialog for that was not possible to close.
– The effect library has been updated with fixes for some potential crashes.