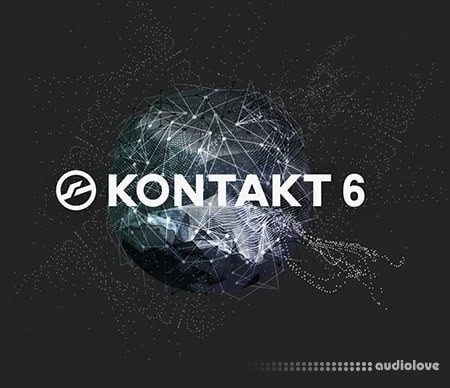 WiN: P2P | 08 July 2021 | 675.6 MB
MAC: MORiA | 06 July 2021 | 581.52 MB
With KONTAKT 6, you can sound like a snare drum, a symphony orchestra, or anything in between, from a universe of sampled instruments. It’s a simple sampler when you want it to be, and a deep sonic scripting laboratory when you need something more. The next generation of the world’s favorite sampling platform gives you new instruments and new features under the hood – so you can layer, link, stretch, and shape your sounds any way you can imagine.

Enhanced effects: Even more effects for your creations, for greater expression and realism

HYBRID KEYS
A contemporary, creative, and ultimately new take on keys and piano sounds. HYBRID KEYS moves away from conventional sampling processes and instead focuses on inventive techniques such as re-amping, creative mic positioning in interesting spaces, and vari-speed experiments with tape.

NEW FEATURES FOR BUILDERS
KONTAKT has long since grown beyond its origins as a software sampler, and now provides a solid foundation for building advanced sample-based instruments. We’ve been supporting this platform, and the people who use it, with continuous updates to KONTAKT 5, and KONTAKT 6 builds on this strategy with some big additions for you builders out there.

WAVETABLE MODULE
The latest version of KONTAKT adds wavetable synthesis to the ever expanding KONTAKT toolset. All three of the new Play Series instruments incorporate this new module, and we’re looking forward to hearing what you create with this powerful new building block.

CREATOR TOOLS
Creator Tools is a standalone application designed to improve the workflows of library builders and instrument creators. It consists of two elements: A Debugger, for identifying and fixing problems in KONTAKT script, and an Instrument Editor, which can load and run Lua scripts to automap samples, duplicate and batch rename groups, and copy settings from one part of an instrument to another.

► v6.6.0 - 2021-07-06
VST3 Target, User content base path, flexible EVENT_PAR routing.
ADDED Kontakt now also provides a VST3 target
REMOVED 32bit VST2 target is no longer provided
CHANGED The Options Load/Import tab is updated and renamed to Loading
ADDED It is now possible to set a user library path in the Kontakt options Loading Tab
ADDED KSP New KSP command redirect_output()
IMPROVED KSP It is now possible to refresh the ui_file_selector
ADDED KSP Scripts can now send modulation events to the new From Script modulator
ADDED KSP It is now possible to attach the ui_meter to gain reduction meters
ADDED KSP Level meter ranges and orientation can now be set with $CONTROL_PAR_RANGE_MIN and $CONTROL_PAR_RANGE_MAX
ADDED New factory script Arpeggiator (sync) based on the listener callback for solid host sync timing
ADDED The about screen now displays the Kontakt target
FIXED When modulating amp release, the release velocity was delayed by one note
FIXED Kontakt could crash on Windows if the system user documents folder was on a USB or network drive
FIXED Kontakt could crash when re-ordering NKIs in a bank
FIXED In some cases external modulator names were missing in instruments created with Kontakt 4 or earlier
FIXED Wavetable Inharmonic knob is now correctly displayed as a bipolar value
FIXED Collection of minor cosmetic GUI fixes

VST3, Content Library Path, KSP Commands, Creator Tools 1.4
At a Glance
As the sub-header gave away, we are happy to share with you the long awaited VST3 target!
Additionally, a great UX improvement for cases where users have missing content has been implemented: you can now specify a base path for your non-Player Content but also choose if you want to store referenced paths relative to the base path. You can set these in the updated Loading tab (fka Import/Load) of Kontakt Options.

And although VST3 is the main purpose of this release, we couldn't have a release without a couple of cool new KSP features and improvements. To name one, you can now route the EVENT_PARs to various destinations!

Finally, we are sure that a lot of our builders will appreciate the new Creator Tools update as it enables file system access via Lua. That means that one can now automate any process via Lua scripts, without leaving the Creator Tools environment! We are certain that you will be super creative in finding ways to optimize your workflows. Enjoy and use responsibly :)

NOTE: Hosting Kontakt as VST3 inside Komplete Kontrol and Maschine is not fully supported yet. Please wait for the respective product updates.

This version is fully compatible with the new Creator Tools 1.4.0 beta.
We hope that everyone is safe and thanks again for all your help.

Greetings from Berlin,
The Kontakt team

Please scroll down all the way to the bottom of this page for the download links and documentation.
Notice that there are also download links for Kontakt 6.5.3 and Creator Tools 1.3.0 should you feel the need to roll back from the beta.